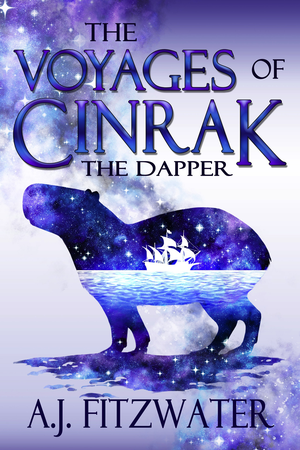 Available from Queen of Swords Press

The Voyages of Cinrak the Dapper

by A. J. Fitzwater

Cinrak the Dapper is a keeper of secrets, a righter of wrongs, the saltiest capybara on the sea and a rider of both falling stars and a great glass whale. Join her, her beloveds, the rat Queen Orvilia and the marmot diva Loquolchi, lead soprano of the Theatre Rat-oyal, her loyal cabin kit, Benj the chinchilla, and Agnes, last of the great krakens, as they hunt for treasures of all kinds and find adventures beyond their wildest dreams. Let Sir Julius Vogel Award-winning storyteller A.J. Fitzwater take you on a glorious journey about finding yourself, discovering true love and exploring the greatest secrets of the deep. Also, dapperness.

The Voyages of Cinrak the Dapper includes seven stories about Cinrak and her crew:

kevin recommends
The Voyages of Cinrak the Dapper
by A. J. Fitzwater

A. J. Fitzwater has written a beautiful, hopeful, light-filled and joyous book!

This mosaic title filled with anthropomorphic rodents, sea creatures, mer folk and... cats, will more than make you smile. With a swashbuckling capybara pirate captain and chinchilla kraken-communicating ship's mate adventuring with their pure hearts to... bearded islands...? You'll never want this adventure to end!