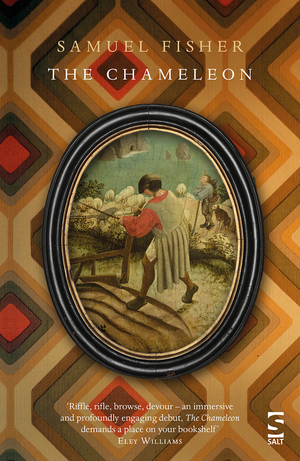 SYNOPSIS  John is infinite.  He can become any book, any combination of words – every thought, act and expression that has ever been, or ever will be, written. Now 800 years old, John wants to tell his story.  Looking back over his life, from its beginnings with a medieval anchoress to his current lodgings beside the deathbed of a Cold War spy, John pieces together his tale: the love that held him together and, in particular, the reasons for a murder that took place in Moscow fifty years earlier, which set in train a shattering series of events.  Samuel Fisher’s debut, The Chameleon is a love story about books like no other, weaving texts and lives in a family tale that leads the reader on an extraordinary historical journey, a journey of words as much as of places, and a gripping romance.  PRAISE FOR THIS BOOK  ‘Riffle, rifle, browse, devour – an immersive and profoundly engaging debut, The Chameleon demands a place on your bookshelf’ —Eley Williams  ‘A book narrated by a constantly transmuting, text-shifting book? I was quickly won over by the bibliophiliac verve and deep humanity of this Borgesian novel.’ —David Rose  REVIEWS OF THIS BOOK ‘The Chameleon could be considered something of a love story, both about books, and between the people that read them. It follows the story of a family through the years, the memories that shaped them, and the impact of past events on their relationship through the years. In the early stages of the novel we meet a man who is approaching the final days of his life, but in this novel a man’s mortality is portrayed from the perspective of someone infinite, someone who has lived for centuries.’ —The Owl on the Bookshelf  ‘A fantastic new talent (recommended by Eley Williams!) … [a] mesmerising debut novel (and it really is brilliant).’ —The Book Hive  ‘Over the weekend I read and hugely enjoyed The Chameleon by Samuel Fisher. It is a novel narrated by an 800-year-old shapeshifting book. It can turn into any book it wants to. It tells the story of the people who have owned it down the years.’ —Scott Pack  ‘As well as being a new novelist, Fisher is also a founder of Peninsula Press, a small independent publisher whose list to date shows a predilection for innovative and experimental voices. It’s a partiality replicated in this wonderful, funny and audacious debut. Who knows what my copy of The Chameleon will turn into while my back is turned but I look forward to discovering whatever voice or artefact Samuel Fisher will throw himself into next.’ —John Boyne, The Irish Times  ‘You might expect a debut by a bookseller to be a hymn to the joy of books, but writing from the actual viewpoint of a book (here the narrator, who can transform himself into any combination of words, places himself at the centre of various events over the past 800 years) takes that love to a whole new level. Fisher has so much fun with this tricksy conceit that the very human story he settles on (amid nods to Virginia Woolf, Jorge Luis Borges and Dylan Thomas), of a cold war spy looking back on a life, takes time to hit home. That it eventually does is testament to his infectious enthusiasm for the power of the novel.’ —Ben East, The Observer  ‘Be it a love story, a thriller or a work of history, a written account makes those it depicts last forever. Revelling in its own wizardry, The Chameleon weaves a captivatingly reflexive tale around the life-giving possibilities of the printed word … Fisher practices a deft sampling technique, mixing in snippets of literary classics into his tale and reflecting on their relevance. The result is a compelling narrative and a subtle meditation on literary history.’ —Hackney Citizen  ‘It seems only natural that if a bookseller was going to write a novel, it should be about books. Fortunately that's exactly what Wivenhoe’s Samuel Fisher has done although The Chameleon, which was released by cool indie publishers Salt this week, is a very different kind of book altogether. That’s because Samuel’s main character John can become any book, any combination of words, every though, act and expression that has ever been, or will ever be, written.’ —Neil D’Arcy Jones, Colchester Gazette  ‘This is undoubtedly a literary novel about a family and relationships, but also it’s about a love of books and it’s a spy story. It’s not surprising that the author set up a bookshop, you can almost imagine him spending time rooting through the stock and absorbing stories for this novel.’ —Paul Burke, Nudge-Book Magazine  ‘The concept of a self-aware book is the kind of literary conceit that, in the wrong hands, could lead to the worst excesses of post-modern fiction. The book does, after all, identify with Borges’ tale of the infinite library as though it’s “an autobiography written by a future version of myself”. Roger’s story, in turn, is essentially quite a slight vignette that would struggle to fill a novel on its own. But by marrying them together, Fisher balances and intermingles the two strands so that they sustain an engrossing, satisfying and quite touching novel. Greater love hath no book than that it would transform itself into a biography of its most cherished owner.’ —Alastair Mabbott, The Herald

This is a well-told tale about the power of the written word to endure and change.

gurdonark is storing 12 ebooks on Libreture. Sign up and start your library today!