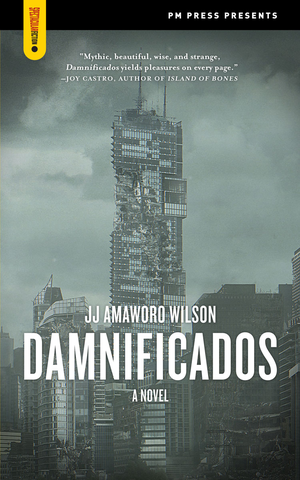 Uses magical realism, revolutionary politics, and romantic adventure to bring to life a colorful community of squatters in an imaginary Latin American city
Damnificados is loosely based on the real-life occupation of a half-completed skyscraper in Caracas, Venezuela, the Tower of David. In this fictional version, 600 “damnificados”—vagabonds and misfits—take over an abandoned urban tower and set up a community complete with schools, stores, beauty salons, bakeries, and a rag-tag defensive militia. Their always heroic (and often hilarious) struggle for survival and dignity pits them against corrupt police, the brutal military, and the tyrannical “owners.” Taking place in an unnamed country at an unspecified time, the novel has elements of magical realism: avenging wolves, biblical floods, massacres involving multilingual ghosts, arrow showers falling to the tune of Beethoven’s Ninth, and a trash truck acting as a Trojan horse.

aa5an is storing 348 ebooks on Libreture. Sign up and start your library today!