Decommissioner 37 has been charged with the swift and unenviable task of retiring a god, Ohin. The problem is, he doesn't want to---and neither should he have to, as it turns out. Though she begins the process, it quickly becomes clear that not only does she not have the necessary information to perform the ritual, but that detail has been deliberately obscured. But by whom? And why? 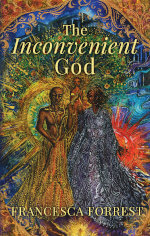 Commanded by a completely different deity to respect and celebrate Ohin, the decommissioner unravels the truth behind the miscreant god and makes a bid to prevent unjust disaster.

What's special about it?

Imaginative and beautifully crafted, this story is a joy to read. The characters pop out of the pages and the unexpected scenario is clever and insightful.

What's truly special about it, though, is its depth. It's partly about the loss of language, the dismissive attitude towards that loss by those who have no connection to it, and a reminder that 'spiritual' is not, in fact, the command of church but of spirit. A people's spirit flows within their language. Colonisers know this, and the oppressed do too. That's why language is often on the fighting front of any colony.

Colonisers, you say? Well, yes. Reading between the lines, sprinkled amongst realistic dialogue, this book hints at how colonies are acquired without bloodshed (sort of) through the sometimes well-meant machinations of people on the inside. It refers to those with just enough insight to see the colonisation taking place and with just enough power to help it come about relatively peacefully.

Right or wrong, it matters not. What's done is hundreds of years done, but Decommissioner 37 has an important part in reconnecting the people to their spiritual base.

This book is everything I hoped it would be. It works truth into its fiction, a carefully woven fabric of imagination and humour, with an understanding of the experience of living spiritually—one foot in both reality and unreality. It doesn't bray its messages into the reader's head, but feeds them in through inference and "mentions" as much as anything.

It's fanciful, fun, serious and unusual. A winner, in my book!

The Inconvenient God by Francesca Forrest is available to buy in DRM-free formats direct from the publisher, Annorlunda Books.