The Town by B.P. Gregory is a clever, well-pulled-together novelette with themes of loneliness, abandonment, disappearance, the losses felt by those left behind, and alcoholism as a coping mechanism, wrapped up in fierce witticisms and photo-perfect observations of the human condition.

It's also a horror flick filled with suspense, flawed heroes, bizzarro situations and terrified bravery. And it's funny with it.

See also: are all Australian authors batshit, or is it just the ones I find?

In essence: The Town by B.P. Gregory 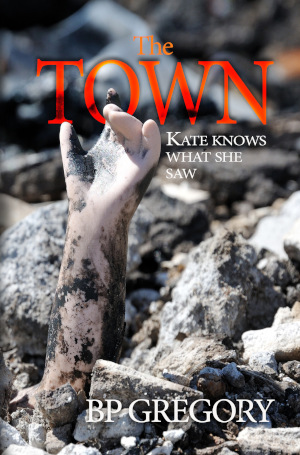 You really don't want to be Kate. Not Sober Kate, with her shitty job, staring at satellite photos in search of fire damage; not Drunk Kate, crying down the phone to her irritated supervisor, handily forgetting everything she did the night before in a wine-infused funk. She's bloody-minded enough to follow up on a mysterious sighting of a town that everyone claims doesn't exist, however, and she and her mismatched colleague, Lin, embark on the kind of detective road trip that has all the hallmarks of A Bad Idea.

Along the way, they meet a creepy fireman with his sinister colleagues, a woman who eventually barks like a dog, a man looking for his brother a lifetime after the latter's disappearance, and a heap of locals that range from Wolf Creek Weird to Pretty Fucking Sensible. And much. Much. Worse. Don't bother trying to guess. You can't.

"It's a big slice out of the ass end of bumfuck out there."

What's extra about it?

The story's great - a totally unexpected slice of creative innovation - so if that's all you come for, you'll get your money's worth, but what made it for me was the writing. This isn't the pretty, hard-to-read-cos-it's-so-overworked prose you're used to. It isn't description for the sake of it. There's nothing in this book that's been advised by a How To Write A Novel expert crash course. It isn't trying to impress you. (And later on, when the chips hit the pan, it keeps its wit but stops being funny, believe me). But anchored in astute observation of why people behave the way they do, it hits nail after nail, dead on. It's painful, it's bitter, regretful, and sarcastic, and above everything, it's accurate.

If you enjoy suspense, this is surely the book for you. From the very first line, a pyre of suspenseful moments are built higher and higher, until you reach the dizzying heights of WTF?! The characters are likeable--Kate less so (and she admits it), Lin more so--and Kate's saving grace is her determined refusal to do what's expected of her. No-one really expects her to do the right thing, so when it turns out to be her secondary motivation (the primary is the desire to escape her life) for apparently chucking her life into the air, it's impossible to write her off as unlikable, no matter how hard she tries.

Ever wondered what it must be like to walk on out of your life forever? This book is for anyone who's ever suffered the earth-shattering anguish of someone else close to them doing just that. And just maybe it's a cautionary tale for anyone thinking of doing so.